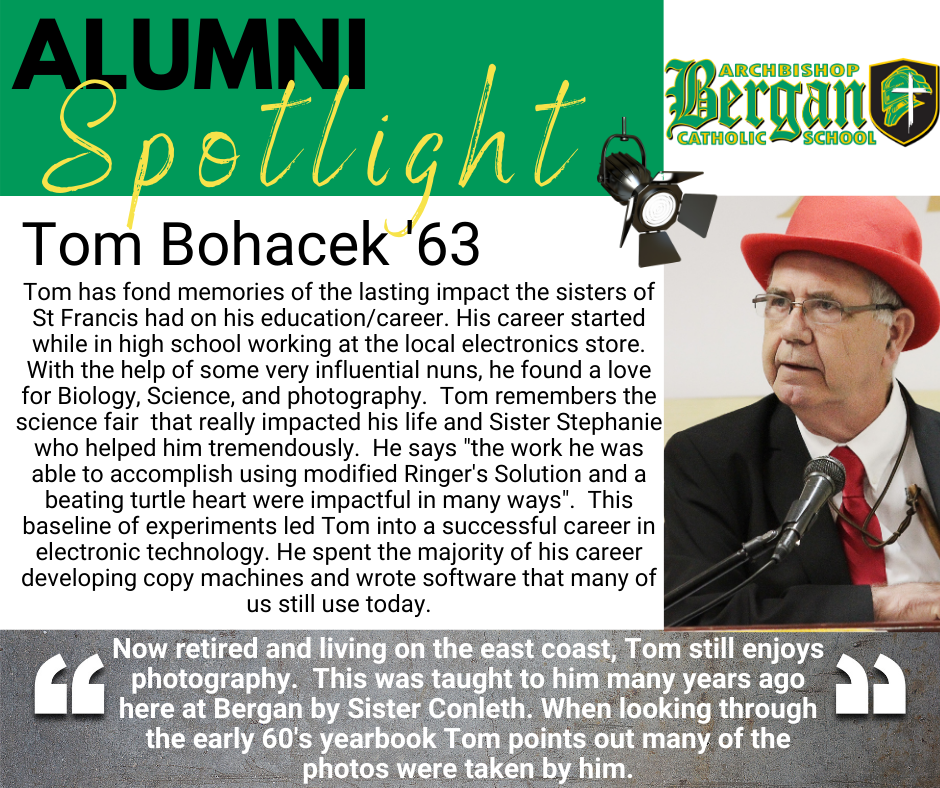 Bergan Graduate of the Class of 1963.

Tom has fond memories of the lasting impact the sisters of St Francis had on his education and career.

His career started while in high school at Bergan working at the local electronics store, Claasen Electronics. With the help of some very influential nuns, he found a love for Biology, Science, and photography.  Tom remembers the science fair while he was here at Bergan that really impacted his life and Sister Stephanie who helped him tremendously.  He says " the work he was able to accomplish using modified Ringer's Solution and a beating turtle heart were impactful in many ways"  This baseline of experiments led Tom into a successful career in electronic technology. He spent the majority of his career developing copy machines and wrote software that many of us still use today.

Now retired and living on the east coast, Tom still enjoys photography.  This was taught to him many years ago here at Bergan by Sister Conleth. When looking through the early 60's yearbook Tom points out many of the photos were taken by him.

When I was a sophomore in high school, our English teacher, Sr. Collenkill,(sp) was also the school newspaper adviser. They did not have a photographer, and one day in class she went on and on about it. I spoke to her after class and asked what kind of a camera I would need to be the school photographer. She told me nothing fancy, as long as it is 35mm it can be all manual controls. I went to the local camera store in town, Paul's Camera, looking for exactly that. I bought a Voightlander C, which was a good German-made camera, but all the controls were manual. I spend $35 for it, which was a lot of money in those days. I returned to school and told Sr. Collenkill that I was her man and thus became the school photographer. I did not know much about taking pictures, but the school was new and they had built a darkroom off of one of the science rooms. The science teacher taught me how to develop black and white film in that lab. We had hall monitors in school, two on the lower floor and two on the upper floor. I had a permanent pass for all of the upstairs, signed by the science teacher, and a permanent pass for all of the downstairs rooms, signed by Sr, Collenkill. Of course, I could go anyplace now, all I needed to say was that I was taking pictures. After a while I didn't even bother to show my pass, they all knew I had one. I was the only on school to have two permanent passes that would get me into anywhere to take pictures. I really had it made. We needed pictures of the track team, the baseball games, the football games, all of the other activities as well as retreats and assemblies such as the school council. So most of the pictures in the school newspaper and yearbook of activities were taken by me. I did not know enough in those days to a credit line in the paper.

When I was a senior, there were two girls that were the co-editors of the paper and Chester Koza, who I consider a friend, was the assistant editor. About halfway through the school year, the girls quit, two weeks before the next issue was due. Poor Chester, he had to get a school paper ready in two weeks and barely had enough for the front page. The back page was the sports page written by an athlete, so that was finished too. He came to me with his problem. Since the science fair was coming up the next weekend, I suggested that we do a picture spread filling the center two pages with photographs of all of the science projects, which indeed we did. It turned out to be a big hit with the students who had won any award in the science fair.

And thus began my love of photography. It was not until 1975 that I bought my first SLR camera, joined the Xerox Photo Club, and have enjoyed photography ever since, even to the point of teaching an adult education course at the local high school.

When I was a junior in high school, I was also working as much as I could, but it was science fair time, so I wanted sometime that was electronically inspired. After some discussion with Don, who was my boss at Claasen Electronics, I decided to make an automated display of various electronic waveforms to be displayed on my oscilloscope for the viewer to see, as well as play through a speaker. There would be nothing but a push button to start the display. I had wired up a stepping switch to step through each phase of the operation. I had a full-size reel to reel tape recorder that provided the audio for the display. Also on the back of the tape were many pieces of tin foil stuck on with some tape that would trip a relay and advance the stepper to the next position, each time the tin foil made contact with two eye screws that were connected to the relay. The poster board behind the display showed how everything was connected. The tape was configured as an endless loop, and the last piece of tin foil would shut down the display, ready to start again with a push of the button, labeled “Start” The biggest problem that I had, was getting the tape recorder to pull the continuous loop tape through the machine. I had only the idler wheel to do all the work. It just could not seem to pull the tape for the distance that I needed it to. Eventually, I figured out that if I had the tape hanging in a giant loop from the ceiling the idler wheel could indeed pull it through as it was not much of a load when configured that way. It worked like a charm. All I had to do was to stand there and tell people to push the button to start the display. Judging was done by science instructors from other schools, such as the public school and perhaps Midland college. They would come a day before the PTA meeting which was devoted entirely to the science fair. When the judges were there, one asked me the difference between alternation current and direct current. I froze and could not answer his simple question. I thought I was doomed. But when the ribbons were passed out, I had taken first place with a blue ribbon. It was also a bit hit at the PTA meeting, I think because I did not have to explain much, other than just push the button. 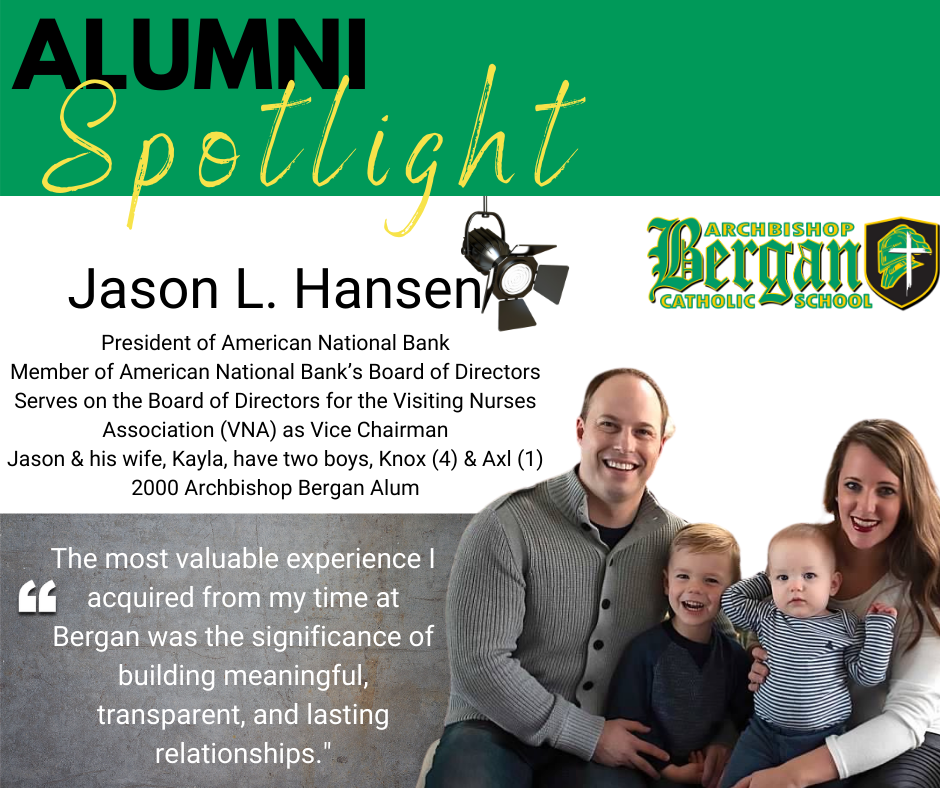 Jason is an active community leader and advocate in many roles. He currently serves on the Board of Directors for the Visiting Nurses Association (VNA) as Vice Chairman. Previously, he served as Chairman of the Board for the Urban League of Nebraska, Finance Chair for the Goodrich Scholarship Program and as a mentor for Sacred Heart Elementary School.  He is a past recipient of the College of Public Affairs and Community Service Alumni Award for Excellence in Public Service from the University of Nebraska Omaha.

How did your education here at Bergan prepare you for your career? What values, lessons did you learn while at Bergan that you use still today?

The most valuable experience I acquired from my time at Bergan was the significance of building meaningful, transparent, and lasting relationships.  I am incredibly privileged and fortunate that I have remained close to several of the friendships that I first formed while at Bergan.  That is certainly something I have long cherished.  The educational environment at Bergan provided for – and encouraged – engagement in building impactful relationships amongst classmates, teachers, and coaches.

Because of the value of relationship building that I developed while at Bergan, I have integrated that into my professional career, whether it be with my peers, my team members, or my clients.  In an increasingly commoditized corporate marketplace, it is often the strength of the relationship shared amongst individuals that becomes the primary differentiator.

Do you remember anyone specific (coach or teacher) that helped shape the person you are today?

The teacher that had the most profound impact was Joe Wojtkiewicz.  He was such an enthusiastic educator, who understood the importance of maintaining genuine engagement with his students.  He also encouraged dialogue and competing viewpoints while never sacrificing his empathetic demeanor.  I always found his passion for service and volunteerism extremely honorable.

Larry Martin’s influence in how I developed as a competitor, worker, and teammate were all essential traits that were advantageous for my personal and professional progression.  After I graduated from Bergan, I spent some time with Larry assisting in coaching his football program at Omaha North; that experience provided me an invaluable opportunity to familiarize myself with the North Omaha community and see firsthand the need for greater commitment from both public and private entities to support our underserved and minority communities.  Both my wife, Kayla, and I remain incredibly passionate about community advocacy, volunteerism, and philanthropy – Joe’s approach to teaching the importance of service and Larry providing me exposure to North Omaha were unquestionably essential in developing that passion.