BERGAN JUNIORS HAVE A SURPRISE GUEST 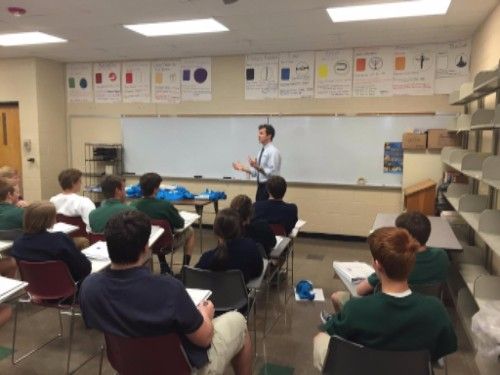 BERGAN JUNIORS HAVE A SURPRISE GUEST

Annually during spring semester, Juniors at Archbishop Bergan Catholic School participate in John Baylor Prep, an ACT Test preparation program. In addition to his test prep course, John Baylor is best known across the state of Nebraska as the radio voice of University of Nebraska Volleyball.

After participating in the first video session, three weeks ago Bergan Junior, Jack O’Neal tweeted John Baylor and asked him, “How many re-tweets would we need to get him to come to do a prep session in person?” Little did the Bergan Junior Class know, that Tweet did get Mr. Baylor’s attention and his assistant contacted Bergan’s Guidance Counselor, Mr. Doug Moore and set up a personal training session for Friday, April 8th – the day before most of the Juniors would be taking the ACT exam on April 9th. Mr. Moore kept encouraging students to re-tweet, all without them knowing Mr. Baylor would be coming anyway. Jack reports that he got 95 re-tweets.

According to Mr. Moore, “John has a rather interesting personality on his ACT prep videos and he has the exact same personality in person. Our students were really excited to hear him exclaim his popular sayings and phrases in person. I feel like being able to have John teach a session live at school will motivate our students to do their best tomorrow on the ACT and hopefully earn high test scores.”