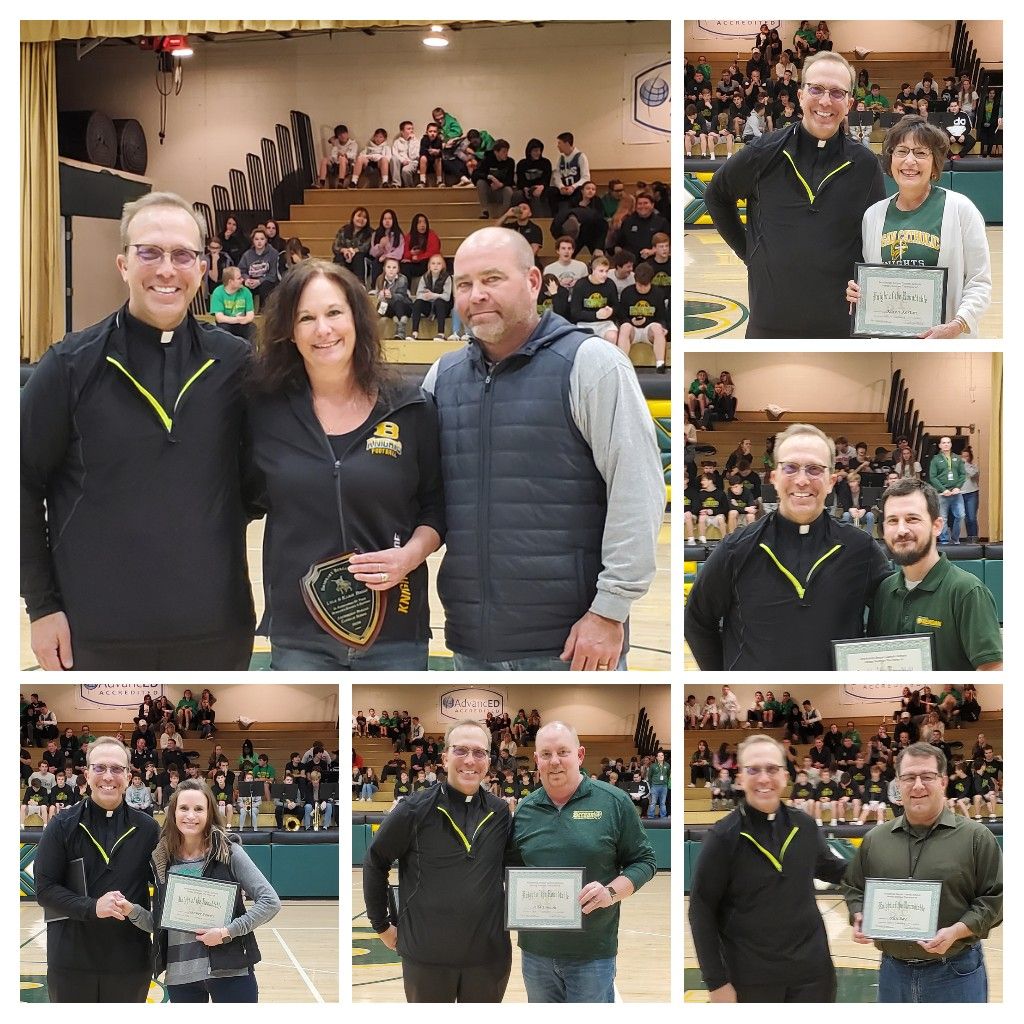 In order to honor those people who have shown outstanding dedication to the continuation of Catholic education at Archbishop Bergan Catholic School, we established the Knights of the Round Table and the Honorary Bergan Knight Awards.

These awards are given annually during Catholic Schools Week.  The Honorary Bergan Knight will be selected from past and present members of the Knights of the Round Table.

This year’s Knights of the Roundtable award winners are…

Tad exemplifies the type of person that is actively supporting the school.  His staunch backing of the Bergan school system in the community through his efforts in the Fremont area business community has spread the message of the great things taking place at Bergan.  As a President of the Bergan Board of Education, Tad has continued to make strides in the area of strategic planning and continued improvement.  His support of Archbishop Bergan Catholic School is unwavering and appreciated.

There seems to be with Extra Curricular activity that one driving force that makes sure that the program is achieving at a high level.  Chris Kabes has been that driving force for the Bergan Speech and One Act programs.  For the past five years, in his second stint leading these programs, Chris Kabes has established Archbishop Bergan Catholic as a small school with a very competitive speech and drama program.  He has spent countless hours tutoring our elementary, middle and high school students in our extracurricular speech program and in the past few years has added One Act Play to that list as well.  Without his tireless background work, our students would not have the chance to compete and succeed in these important extracurricular activities.

In the past few years Karen Kortan has emerged as a crucial volunteer at Bergan Elementary School.  Whether it is helping out in the one of the classrooms or assisting a student in a one on one setting, Karen has filled a huge need for volunteerism at Bergan.  Since her retirement from the Fremont Public Schools, Karen has also served as a substitute teacher for Bergan Elementary.  Without selfless volunteers like Karen Kortan, our school would be a lesser place.

For the past 11 years, Jennifer Powers has served as the First Grade Instructor at Bergan Elementary.  During this time she has developed an academic sound First grade program that has students actively learning, monitoring their progress and learning how to become better disciples of Jesus.  Jennifer gets the most timid of students to actively participate and serves a great professional role model for these young students to emulate.  She deliberates how to reach every student in her classroom, does what is best for her students and is always willing to lend a hand.

For the past 22 years, Rich Ray has served the greater Fremont area as an example of how radio journalism and broadcasting should be done.   As “the voice” of Fremont area sports broadcasting he has painted a picture of the extracurricular triumphs and defeats of a generation of Archbishop Bergan Fighting Knights.  As an award winning broadcaster, people in the Fremont Area really do not understand how lucky we are to have such a quality, genuine talent occupying the airwaves within our own community.  For his years of support of the Bergan Fighting Knights sports programs, we honor the voice, Mr. Rich Ray as an Honorary Bergan Knight of the Roundtable.

Each year we evaluate the past Knight of the Roundtable Award winners and choose the Honorary Bergan Knight of the Year award winner.  “Since my appointment as the Principal of Archbishop Bergan Catholic School seven years ago, there have been a handful of people that have been a core group of volunteers that make Archbishop Bergan Catholic School such a special place, said Mr. Dan Koenig principal at Archbishop Bergan Catholic School.  This couple exemplifies what it means to give and ask for nothing in return.  These two have never asked what is in it for their family but have always asked in return, “what can we do for the school?”  All four of their kids have been Bergan Knights and during the time that their children have been in school here, they have made a lasting impact through their willingness to share their gifts.  Koenig continued to say, “If I were to give a young parent a blue print of how to be a supportive and productive parent for their children and school, I would have them emulate this couple.”  For the roughly the past twenty years this couple has lend a huge helping hand in making the Knight Event, Booster Club, Fish Frys and generally all Bergan Events the best that they can be.  The last of their boys will graduate in two years, but they will continue to make an impact at our school for years to come.